The Beginings if Luta Livre[]

In 1928, at 14 years of age Tatu joined the ACM Club of Rio de Janeiro, where he began to train and dedicate to the sport he thought was the ideal of his life, a sport where he could use his strength and vigor. Thus began a series of fights to become champion.

He participated in his first international championship competition in 1936, however it was established as Brazilian Championship instead.

Then he reached the "Benedito Valladares" World Cup where dedicated fighters from all over the world faced each other to reach the final round against the Champion Charles Ulsemer. Tatu ended up facing the French Ulsemer and won the Governor Valladares Golden Belt in the third round and went on to do the gold Belt great honor by winning the World Championship in 1940.

He continued his career undefeated and was regarded by the press as "the most complete and most perfect fighter" and never had a questionable or unjustifiable win. In his whole career he only lost two fights early on, against Black Mascara and later for a rematch against Japanese fighter Yano, where a stroke of bad luck led him to the ground awkwardly, which broke his collarbone. The referee ended the fight under unequal conditions. After his recovery he participated in a number of championships. There were no records of defeats Tatu, just a few draws and many victories wich was just the beginning of everything.

During his world travels he faced a Polish Champion Norkem, a man of impressive size who everyone thought would win. In the first minutes Tatu was almost defeated, but put in eight minutes with the champion for a draw. He then battled David Mesnik and in the second round applied his classic choke witch lead Mesnik to the canvas and forced him to give up, thus losing his belt to the Brazilian Champion. Attempt's to bribe him and induce him to lose the fight, followed Tatu into the grandstand and bravely demonstrated that kind of contract was not part of his career. Faced with proposals leading to deceive the public in Wrestling and Vale Tudo, Tatu decided then followed with a long international tour which took from Cape Verde to Mesnik where winning over and keeping it is admired by all.

Got bored once in witness and to be invited to make fights scheduled, after winning Man Mountain, in the locker room to be granted a rematch. They tried to bribe him and induce him to lose the fight, armadillo followed towards the dais and Mountain Man bravely won this type of contract was not part of his career. Against proposals that lead to mislead the public so that vibrate with their disputes Wrestling and Vale Tudo, Tatu then decided to follow in a long international tour which took him to Cape Verde where overcame winning and keeping admired by all.

After closing his career, he continued training and preparing fighters in the practice of sport that he thought was the reason for his life, devoting themselves to teach their techniques he developed during his brilliant career as a fighter, initiator and preparer of secrets that many young people in sport was instructor of various academies, creating a root which in actuality were divided as ramifications, but if each of the fighters of Luta Livre and even some other arrangements are searching has been the master of his masters came when the same person, in who began to develop and win his place by giving substance and credibility to a form of struggle that is often not recognized as it should, is one of the most noblest and struggles that have made the public more vibrate in each submission is that each victory of Brazilian was the most expensive fighter the continent, always maintaining its invincibility, giving name to Brazil and bringing our country to the peak every time they entered the ring and Tatu a few minutes and sometimes seconds gave the victory to Brazil, covering countries in the world competitions of wrestling / everything, never refused to fight with opponents in other ways, frequently granted rematch, because the adversary could find that beat him a second chance, not afraid of losing it knew of its capacity and technical strength.

Euclydes leaves behind the great legacy of Luta Livre which today is popular in several different countries & has it's strongest followings in Brazil & Germany.

Tatu was a Resident of Rio de Janeiro, in Copacabana and married Mrs. Gelia de Oliveira Melo and had two sons, Jorge and Verônica Melo Hatem and two grandchildren John and Peter Carolina. 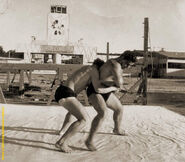 (return to top of page)

Community content is available under CC-BY-SA unless otherwise noted.
Advertisement